In the late 1970s, a group of activists gathered to help women re-claim their right to a natural birth.

YogaBirth feels incredibly proud to count a number of our teachers amongst those dedicated to the campaign. The story of the Active Birth Movement, from which The YogaBirth Way grew, is a powerful one we hope you’ll enjoy.

A legacy of hospitalised births

Giving birth in hospital rather than at home had been encouraged throughout the 20th Century, as it was deemed the safer option.

In the late 1970s, maternity services in the UK were introducing a highly medical approach to childbirth, called the Active Management of Labour.  The main principles of active management were that no labour should last more than 12 hours.  Early amniotomy, artificial rupture of the membranes, became routine to stimulate labour. If dilation of the cervix did not proceed at 1 cm per hour, a synthetic oxytocin was administered to induce stronger contractions.

Along with this went continuous electronic monitoring and the use of epidurals.  The ‘cascade of interventions’ was inevitable. Birth became a controlled, mechanised ‘conveyer belt’ with the woman lying on her back throughout, the powerless recipient of the medical management of her labour.

Pushback from the childbirth community

Many Childbirth Organisations, including Association of the Improvement of Maternity Services (AIMS), the National Childbirth Trust (NCT) and the Association of Radical Midwives (ARM), were up in arms about this medical takeover of birth.  An NCT teacher in North London, Janet Balaskas coined the phrase ‘Active Birth’ as opposed to the ‘Active Management of Birth’. Janet’s ground-breaking book ‘Active Birth’, written in 1980, along with her Active Birth Manifesto, laid out the groundwork for restoring the power to the birthing mother to ‘manage’ her own labour – to have control and take ownership.

In an attempt to restore the power of natural birth, other ‘birth gurus’ were also hard at work.  Sheila Kitzinger the social anthropologist, natural childbirth activist and author of 24 books on pregnancy and childbirth, lectured and campaigned far and wide. Michel Odent, a French obstetrician, popularised waterbirth and introduced the concepts of home-like birthing rooms and birthing pools in maternity hospitals. He is also the founder of the Primal Health Research Centre in London. Frederick Leboyer a French obstetrician, wrote the book ‘Birth without Violence’ in 1974 which popularised gentle birthing methods, in particular the practice of immersing newborn infants in a small tub of warm water to help ease the transition from the womb to the outside world. 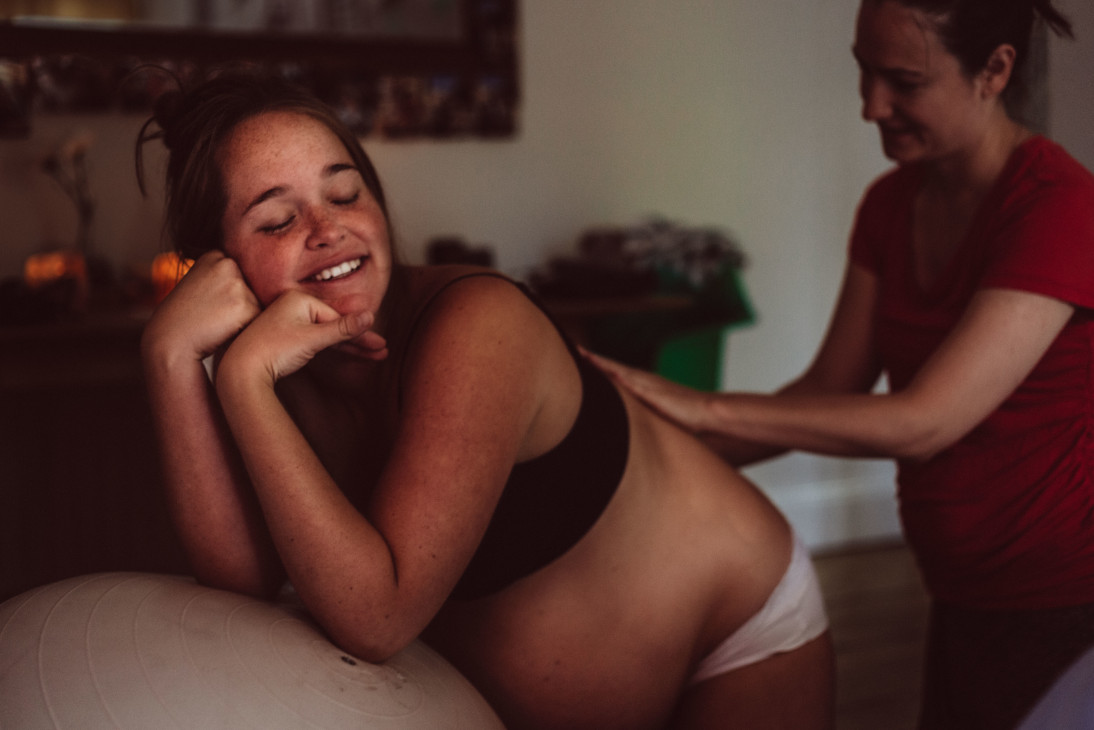 Yehudi Gordon a London based Obstetrician was a supporter of the Active Birth Movement from the outset.  He supported women in NHS hospitals who wanted to give birth naturally and went on with his team of Midwives to set up the Garden Hospital in Hendon and then the St. Johns and St. Elizabeth Hospital in St Johns Wood where the statistics on natural and water births were phenomenally high. He is the author of many books on the subject.  Janet Balaskas and Lolly Stirk designed and taught antenatal and postnatal classes at the hospital.

Supported by her colleagues and backed by the other Childbirth Organizations, Janet spearheaded The Birthrights Rally on the 4th of April 1982. This was attended by around 5000 people with placards saying ‘Stand and Deliver’ and ‘Ban Battery Births’. They marched to Hampstead Heath where Janet, Sheila Kitzinger, Michel Odent and Anna Ford– a well-known newsreader who had a homebirth– demanded the redressing of balance between natural and medicalised birth. That day, the Active Birth Movement was well and truly born. 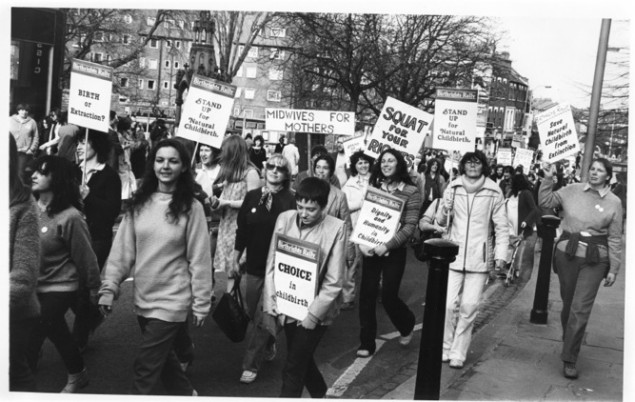 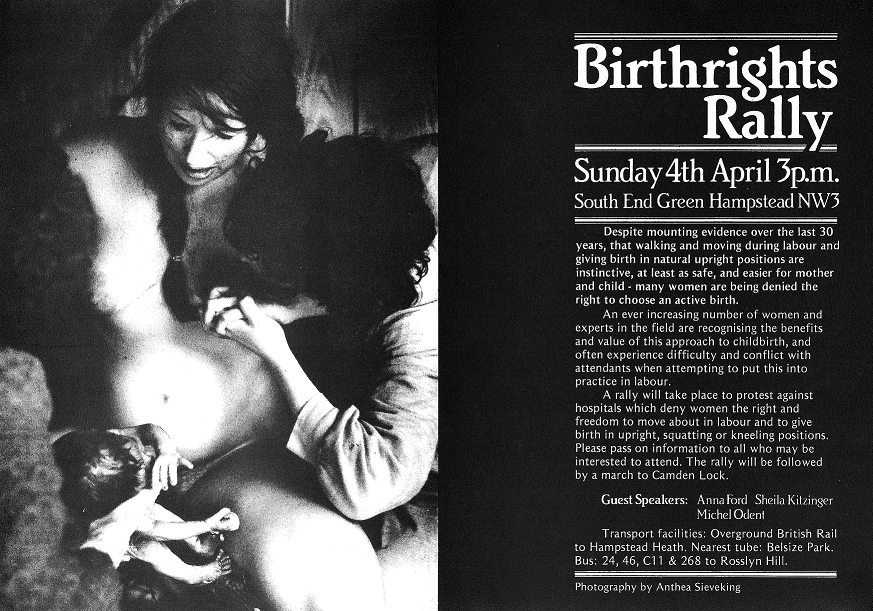 Janet and some of her colleagues began teaching ‘Active Birth Classes’ to pregnant women and brought in physical, as well as intellectual, education to prepare for birth. She then started to train women as Active Birth Teachers and invited colleagues Lolly Stirk and Yvonne Moore to join her as tutors. Both Lolly and Yvonne were founder members of the Active Birth Movement and had been part of the team that organised the Birthrights Rally and other activities around Active Birth.

Lolly Stirk is a yoga teacher who, inspired by the way her personal practise had guided her through the homebirth of her daughter in 1974, felt compelled to pass on the power of yoga to pregnant women.  She was one of the first teachers in London to teach yoga classes specifically for pregnant women and brought this to the course.  She was invited to lecture at Midwifery Schools and Hospitals on the physiology, and philosophy of Active Birth in London and Internationally.

Yvonne Moore has a background in education and became interested in the specific area of Childbirth. Inspired by the births of her 2 sons at home, Yvonne educated parents in birth preparation, encouraging women and their partners to be active participants in the birth of their children. In 1989, she was appointed a trustee of the Primal Health Research Association by Michel Odent.

Soon after joining the training course with Janet, Lolly and Yvonne became co-directors. Between 1986 – 1997 they trained scores of Active Birth Teachers to pass on the powerful blend of yoga and childbirth education, ‘Active Birth’, to the world of pregnant women and their partners.  The course was unique, cutting edge and captured the zeitgeist of the 80s and the 90s.  Many of the women who trained had read Janet’s book and were inspired by the movement.  Others had attended classes themselves in their pregnancies and wanted to pass on what they had learnt.

With the cessation of the Active Birth Teachers Training Course in 1997, the qualified teachers and 2 directors, Lolly and Yvonne, formed their own association with a view to staying connected and continuing their education with CPD events.  In 2000, a teacher and founder member, Olivia Lester, came up with our name, and YogaBirth was born.

The sisterhood continued – and still to this day continues – We meet regularly for CPD Study weekends and days to deepen our knowledge, to share our experiences as teachers and to have fun. In 2005, Judy Cameron a founder member of YogaBirth and midwife, took up the mantle and wrote and launched the first YogaBirth Teacher Training Course.  Along with Annabel Hargrave, Kathleen Beegan and Caitlin Heavey, they trained the first batch of YogaBirth teachers. 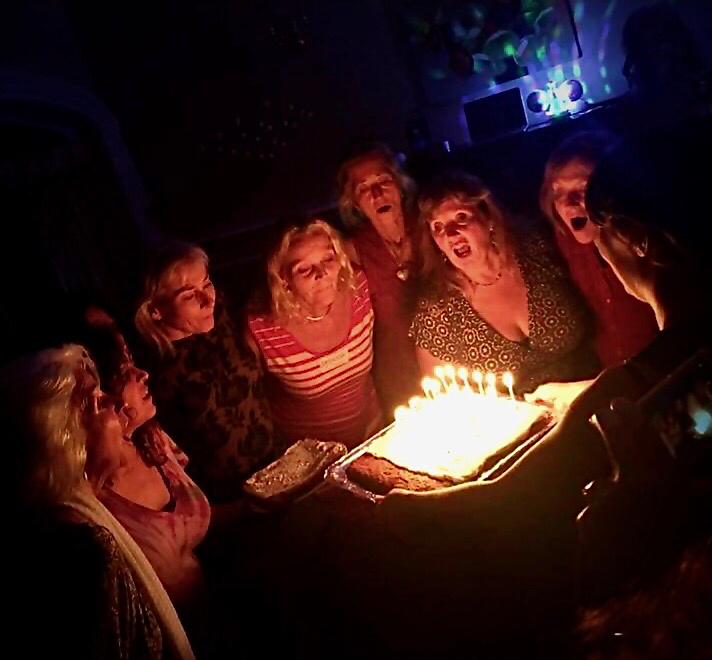 As the years went on, Judy and Kay Millar developed the course format and syllabus and ran 2 more very successful courses.  In 2014 our dynamic, gold standard training was redesigned by the current faculty of 5 trainers. Judy Cameron and Jill Benjoya Miller as co-directors, Ruth Polden, Lola Alcarez-Perez and Julie Krausz as tutors.

All these women have known each other from the days of the Active Birth Movement and are founder members of YogaBirth. Every year more teachers are trained and join our thriving community. Our organisation of Childbirth Education through Yoga is bringing this powerful and important work into the 21st Century.