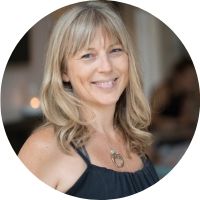 Lulu was an original member of Doula UK (2001), Maternity Reflexologist since 2002, trained as a HypnoBirthing Instructor in 2005 and qualified as a YogaBirth Teacher in 2006.

In 2007 she opened the Pre and Post Natal Department at The Power Yoga Company and still teaches there 3 days a week. She continues to take great pride in it’s growth and in building a supportive community for mothers.

In 2013 she set up the same at Lumi Power Yoga and teaches there twice weekly as well as running pregnancy classes in a ballet school in Chiswick and one-to-one with private clients.

Lulu runs couples workshops every two months or so at both yoga centres and really enjoys delivering engaging, warm and interactive sessions that are informed by her Yoga, HypnoBirthing and the knowledge gleaned from attending around 300 births since 2001.

Lulu discovered YogaBirth early in her second pregnancy after hearing wonderful things about Lolly Stirk. Joining Lolly’s classes proved to be transformational on many deep levels; inspiration and confidence to plan for a conscious and beautiful home birth, a renewed awakening to believe in her potential and uncover deeper instincts and a sense of purpose and fulfilment that led her to do the work she has been loving ever since.