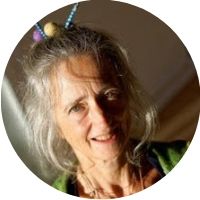 Judy has practised Yoga for many years and has been teaching Pre and Postnatal Yoga since 1996.

It was while working as a nurse in the Himalayas, when expecting her first child, that she first became drawn to Yoga as a practice that would so deeply influence and change her life. She gained enormous benefit from this discovery which gave her the confidence to go on to have her second child at home.

Judy trained initially in South India at the Sivananda Vedanta Ashram in Kerala. She subsequently went on to train for a further 2 years with Janet Balaskas, Lolly Stirk and Yvonne Moore at the Active Birth Centre in London. It was at this time that she came to understand how a more intuitive approach to Yoga, based on the teachings of Vanda Scaravelli, could transform her practice.

She gained her Diploma in Teaching Yoga with the British Wheel of Yoga in the late 1990’s and has also completed a Diploma in Baby Yoga with Birthlight, and Yoga for the Special Child at the Special Yoga Centre in London. She also has a strong interest in the use of hypnosis in childbirth and teaches HypnoBirthing privately and was instrumental in setting up a dedicated Breathing, Relaxation and Self-Hypnosis class in 2012 within the NHS - which continues to run today.

Judy worked as a midwife in the NHS for many years but since retirement in 2014 she teaches her own classes in Yoga for Pregnancy, Couples Birth Preparation workshops, Postnatal Mother and Baby Yoga. She also offers Special Yoga for children with additional needs, HypnoBirthing, Birth Preparation and General Yoga for all levels. As Co-Director of the YogaBirth Teacher Training, Module Provider for both the BWY Pregnancy Module and Postnatal Module, and Lead Tutor for the 500 hour Yoga Scotland Teacher Training in Edinburgh, she has a deep interest in passing on her knowledge to other teachers.

Her own teachers to whom she owes so much include Diane Long, Sandra Sabatini, Christine Borg and Gary Carter.

Judy teaches from Aviemore In the Highlands down as far as Perth, and Crieff. She established the first YogaBirth Teacher Training course in 2005 and continues to run trainings and study days throughout the UK. She lives in Highland Perthshire at the foot of a munro - Schiehallion - “fairy mountain of the Caledonians” - a truly magical place to be.