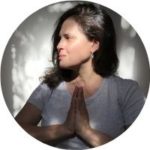 Following the birth of her first child in 1995, Jill trained as an Active Birth teacher and became a doula. She works mainly in North London, offering yoga for birth classes, postnatal yoga and discussion groups, and birth preparation courses. She has been a part of YogaBirth since it was founded, and co-directs and teaches on the YogaBirth Teacher Training Course. She also teaches birth preparation courses for parents and professional development for teachers, midwives and doulas with Janet Balaskas at the Active Birth Centre. For many years she worked with the pioneering Birth Unit at the Hospital of Saint John and Saint Elizabeth, and has travelled in the UK and Europe presenting interactive workshops for midwives.

A large part of Jill's work today is with two non-profit organisations, the Happy Baby Community which she co-founded, and Birth Companions, both of which serve significantly disadvantaged and at-risk mothers, who have little or no resources or support during pregnancy, birth and early parenthood.