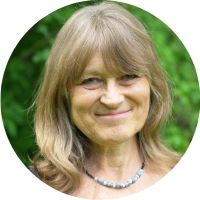 Kay worked as a primary school teacher in the 70's, then moved on to develop early years/pre-school services in her locality in London, and to train in Iyengar Yoga. After the birth of her daughter in 1981, she was encouraged to take over a small class of pregnant women for a pioneering Active Birth teacher who was leaving the area. Because she found this experience so inspiring and fulfilling and the local women wanted to keep it going, she decided to study with the London Birth Centre and to train as an Active Birth teacher with Janet Balaskas.

Kay completed her yoga teacher training with Mary Stewart and Peter Blackaby in the Scaravelli tradition and further qualified with the British Wheel of Yoga, Hypnobirthing and Infant massage. Her CPD continued with involvement in the London yoga Teacher Training Course. Her second baby was born at home in Oxford.

Kay has been a member of Yogabirth since its inception, helped to develop, teach and mentor on our training course for several years and tutored on BWY pregnancy and post-natal training courses with Judy Cameron. She has also worked for voluntary organisations and NHS alongside midwives and therapists and still organises regular Yoga Training Workshops in Oxford.

After nearly 40 years, she says “I still love my work and feel so grateful and blessed to have been included by so many wonderful women and babies at such an important time in their lives.”